You don't have any saved vehicles!

Look for this link on your favorites:

Once you've saved some vehicles, you can view them here at any time.

CALL US FIND US

The Honda Accord debuted in 1976, the fuel efficient fun to drive hatchback sold nearly 19,000 units. Since then Honda has sold more than 13 million Accords which makes it the best-selling Car in America. The Accord has also received numerous awards including Car and Driver’s 10Best award over 30 times. No other model vehicle has matched the achievements of the Honda Accord. Let’s take a minute and take a trip down memory lane to review all the previous generation Honda Accords.

The first generation Honda Accord launched in May of 1976 as a three door hatchback with only 68 hp it was one of the first Japanese sedans with features such as cloth seats, intermittent wipers and an AM/FM radio. The engine was equipped with Honda’s CVCC (Compound Vortex Controlled Combustion) technology. In 1978 the LX version of the Honda Accord released with added air conditioning, a digital clock, and power steering.  Starting in 1977 the four door Honda Accord was released and the power of the Accord increased to 72hp. In 1981 debuted the release of the SE model Accord with leather seats and power windows. 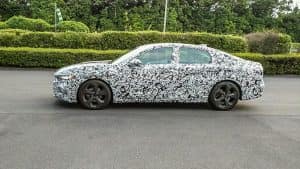 The Second generation Honda Accord launched in September on 1981 this was the first Accord to also be built in the US as Honda’s plant in Marysville, Ohio. This generation Accord included popular features such as shag carpet, velour cabin trim, and chrome accents. In 1983 the Accord upgraded the auto transmission to a four- speed while the manual 5 speed remained unchanged.  In May 1984 the Accord was one of the first Japanese vehicles to offer computer controlled fuel injection.

The third generation Accord became the first Honda to employ double wishbone suspension at the front and rear end.  This suspension setup gave the Accord better stability and sharper handling.

The styling of the 4th generation accord was very evolutionary featuring a larger body and a wraparound rear window.  This was one of the first sedans in the US to feature optic reflectors with clear lended on the head lamps. Honda made significant engineering design improvements. All Accords came with a completely new all aluminum 2.2-liter 16-valve electronic fuel-injected engine standard, replacing the previous 2.0-liter 12-valve model from the past generation. 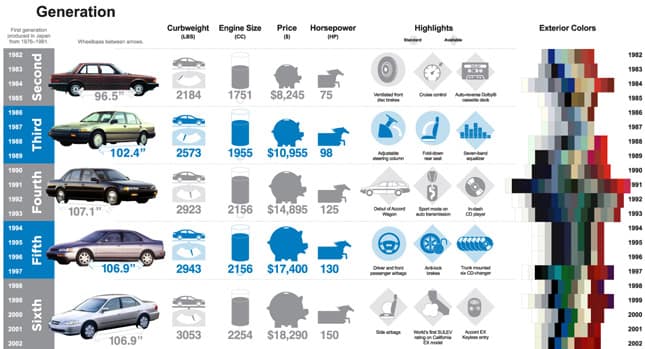 The 5th Generation Accord was released in September 1993 it was larger and wider than its predecessor but shrunk in length.  The 5-speed manual transmission remained mostly unchanged, while the 4-speed automatic noted for its hard shifts, now included Honda’s “Grade-Logic” shift program. All Accord models received a more ergonomic interior with standard safety features such as dual airbags and reinforced side-impact beams. The 1995 Accord debuted a V6 engine, the V6 was offered in both the LX and EX versions of the sedan.

The sixth generation Accord was the largest Accord sharing a platform with the Acura TL. Starting with this generation, cabin air filters were installed as standard equipment and are located behind the glove compartment. In 2000 Accord sedan and coupe received a minor facelift. A new front fascia, rear bumper, side skirt alteration, new taillights and wheel designs gave the Accord a fresh new look. The interior saw few changes with the exception of some fabric and audio configuration changes. The LX and LX-V6 now included a standard CD player, and the EX 4-cylinder now included a 6-disc in-dash CD changer with cassette player while the EX-V6 offered that stereo plus automatic climate control. All V6 models also included a traction control system that could be disabled by a switch, the first Accord to have such a system included.

The 7th generation was available in both coupe and sedan body styles. While a hybrid model was introduced in early 2005. Honda began to offer a more aggressive Accord Coupe, equipped with the 240 horsepower mated to a 6-speed manual transmission borrowed from the Acura TL Type S. This coupe came with 17-inch wheels, perforated leather seating, carbon fiber dash pieces, and an upgraded 180 watt stereo system. Because of the ability to maintain activation of the VTEC system all the way through hard acceleration, the Accord EX V6 6-speed ran from 0–60 MPH in just 5.9 seconds according to Car and Driver, more than a second faster than the automatic version. For 2006, Honda offered this engine and transmission combination in the sedan, which only lasted through 2007. 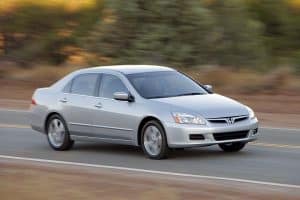 The Tenth Generation Accord 2018

For the brand new tenth-generation Accord the Coupe Model and V6 engines were discontinued for this generation. Honda unveiled the Accord 4-door sedan on July 2017 and sales began in October 2017. The Accord is equipped with standard Honda- Sensing on all models, and a 1.5 liter turbo-charged engine. The 2.0 liter is available for Sport and Touring. To see more specifications of the Accord watch the video below.

You don't have any saved vehicles!

Look for this link on your favorites:

Once you've saved some vehicles, you can view them here at any time.